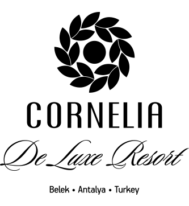 “Cornelia was born as the daughter of Scipio Africanus, a Roman legendary folk hero, in 185 B.C. She married Tiberius Sempornius Gracchus, her cousin coming from a noble family, and gave birth to 12 children, but only three lived to adulthood.

After her husband’s death, although she was a young widow, the Egyptian Monarch Ptolemy VIII proffered her his crown and wanted to marry her, but she refused and devoted herself to educating her 3 children according to Roman traditions and in the highest standards. At a time other Roman women were displaying their various ornamentation, Cornelia declared that her children were her most precious â€œJewelsâ€.

After her death, a marble statue of Cornelia was erected which was inscribed as “Mother of the Grachii”. As the best example of the noble woman that symbolizes the grandeur of Rome, she is still accepted as a symbol of noble women even today well after the Roman era.

Our hotel’s basic principle, “Quality Service in High Standards”, is taken from the life philosophy that Cornelia remained loyal to throughout her life.

Our goal is to host our guests in the best way according to this philosophy.

Cornelia Diamond Golf Resort & Spa is a specially created world particularly by taking into consideration the respect to the nature and environment. All choices are offered to convert your holiday into a fascinating experience on base of the highest quality of service implementation.”

Finding a channel whose audience met as much as possible of the client’s target audience.

Cornelia Diamond aired their first international TV Campaign on Euronews, reaching an audience of high net worth frequent travelers with a core age of 40+.